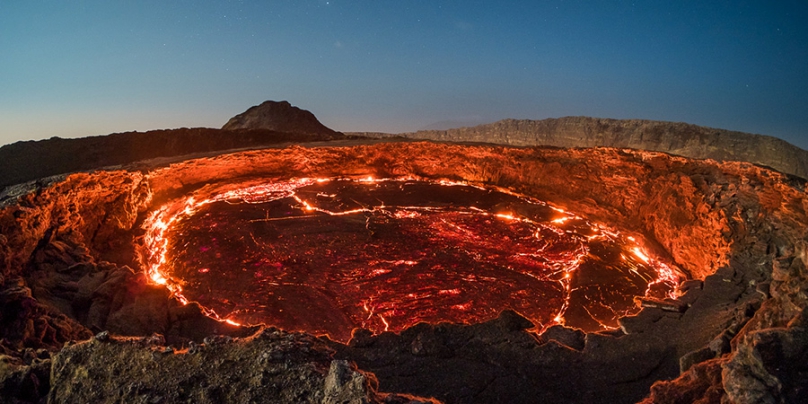 Resulted from faulting and cracking on its eastern side, the Great Rift Valley, which extends from the Middle East to Mozambique, passing in a north-south direction right through Ethiopia. This shearing of the earth's surface occurred at the same time that the Arabian Peninsula, geologically a part of Africa, was sundered from the rest of the continent.Volcanic activity, which has continued until today, finds expression in volcanoes in Ethiopia's Danakil Depression, as well as in the hot springs in many parts of the country. Earth tremors are often felt, and exposed cones of old volcanic plugs are seen throughout the plateau. After the Rift opened, much of this area was flooded by the inrushing waters of the red Sea, a flood that was subsequently stemmed by fresh volcanic activity that raised barriers of basaltic lava. Behind these barriers the trapped inland sea that had formed began to evaporate under the fierce heat of the tropical sun - a process that is almost complete today. Only a few scattered, highly saline lakes - Gamarri, Affambo, Bario, and Abbe remain. Elsewhere, there are huge beds of natural salt - which, at points, are calculated to be several thousands of meters thick.